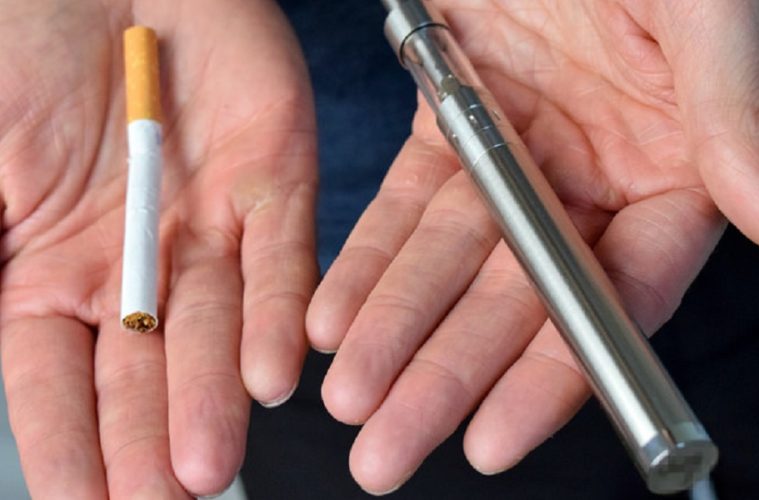 PHE show the impact of smoking versus vaping

An experiment by Public Health England (PHE) shows the difference between a months’ worth of cigarettes (16 packs) and a months’ worth of vaping. This experiment represents the amount of sticky black tar that accumulates in the lungs of a heavy smoker, collected in a bell jar. By contrast, the same nicotine intake through vaping only releases a trace of residue.

In the UK alone, around 7 and a half million people smoke cigarettes, based on an estimate from the Annual Population Survey.
The health implications that come with smoking cigarettes are the biggest, preventable causes of death in the country.

There are lots of misconceptions around their safety. They have been called a “gateway” to smoking and that they pose a significant risk through second-hand inhalation, both of which are not true – according to the Commons Science and Technology Committee.

It’s found that almost 3 million people use E-cigarettes; roughly 470,000 people are using them to help them quit and, while research estimates that they aren’t completely risk-free, they are at least 95% less harmful than tobacco cigarettes.

The experiment showed that every cigarette smoked caused tar to enter a person’s body and therefore poisons their blood-stream. The tar produced by smoking cigarettes is linked to such diseases like heart disease, strokes, and cancer.

PHE says that although E-cigarette use did rise among young people in England up to 2015, the numbers have flattened off since. Unlike the US, the UK has tight regulations and a limit on the nicotine level in E-cigarettes.

PHE believe that E-cigarettes could help many more people quit smoking, which kills half of those who take it up. Results from their smoking cessation programme showed that 65%-68% of people who used vaping as well as nicotine replacement therapies succeeded in quitting smoking.

If you’re thinking of giving up smoking for good, search ‘Smoke Free’.